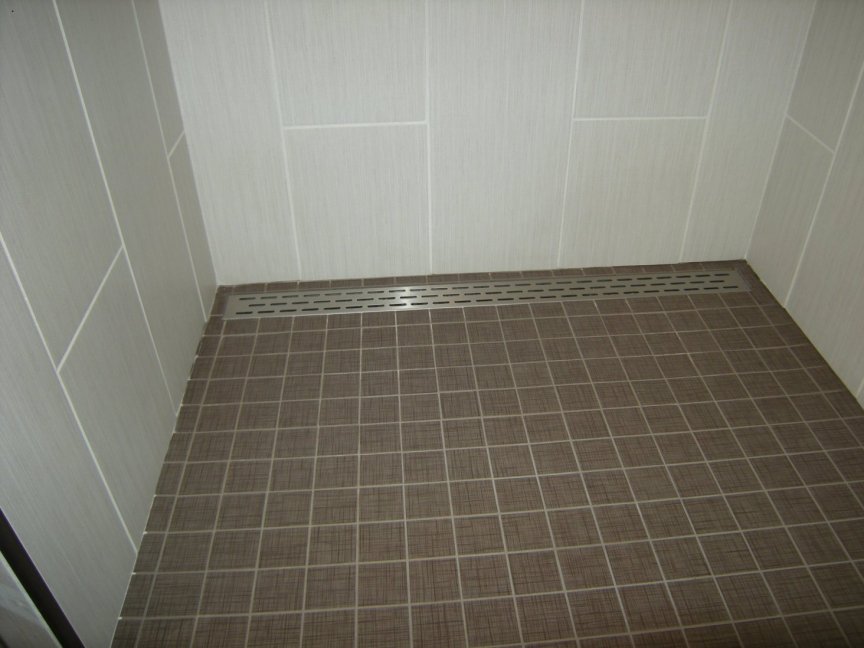 After taking my UDCP training through NARI, I realized that curbless showers were going to be a great addition for anyone and everyone who wanted us to remodel their bathroom.

Reflecting on my past experience, I recall having a plumbing inspector refuse to allow us to create one and citing a plumbing code that prohibited it unless the home had a handicapped inhabitant. Regretfully, he made us change our plans.

We did come up with a cool design, but it was not what I had originally envisioned. This time, the same inspector showed up to finalize the bathroom with a curbless shower. He scolded us, and warned that we were in violation of the plumbing code. He stopped short of having us rip it out and rebuild a curb, but it angered me to think that we were breaking a rule.

What is a curbless shower?

A curbless shower, also known as a zero threshold, barrier free, or threshold free shower, is commonly used with a trench drain or linear drain. It is a wonderful design that works well in most applications. It is a clever way to add a different dimension and it’s a cool modern and functional design.(some of my favorite combinations).

Is it better to beg for forgiveness or ask for permission?

Frustrated, because the concept of a curbless shower is a sensible thing and commonplace in commercial applications as well as European bathrooms, I needed to get to the bottom of what code we were violating. I immediately e-mailed my friend, Aaron Murphy, a CAP specialist Architect in Seattle, who was ready to come to my assistance. He knew immediately that there was something “RONG” ( I spell wrong this way) with the inspector’s interpretation of the plumbing code.

Armed with this new information and not having a copy of the plumbing code book UPC, I left a message with the inspector, not getting a timely response, I contacted the “head inspector” (a tongue in cheek name for the chief plumbing inspector) as a conversation was in order. Bill Vandergriff, said that there definitely was a confusion that he would address. His interpretation of the code goes like this: there is great mention of curb design in the code. At the bottom of the page it states that they are not required in a handicap situation. There are no plumbing, or building  code requirements for handicapped showers in residential applications, ergo the loophole. “This is a wonderful thing to know,” I said, Bill has even installed them himself for friends that needed the freedom that the curbless application provides. He and I agree that special attention needs to be given to waterproofing, but that being said we are just setting tile on the next curbless shower project.

After further investigation, Bill reported that among inspectors, there are strong opinions held by some in favor of them, and just as strong against. The fact that they are not illegal is real. In order to apply the code evenly, there will be a reminder/ refresher memo going out to all of the plumbing inspectors in the state.

If it is a curbless, barrier free, shower you have been wishing for, contact Levco for more detailed information. Bathrooms and Kitchens, as it turns out, are the most likely areas that will need to be updated during our Aged Home Upgrades process. We look at all sorts of things that will make living in your home more functional and enjoyable as we get up there in age and lose some of our ability.